A rubber-tyred metro is a form of rapid transit system that uses a mix of road and rail technology. The vehicles have wheels with rubber tires which run on rolling pads inside guide bars for traction, as well as traditional railway steel wheels with deep flanges on steel tracks for guidance through conventional switches as well as guidance in case a tyre fails. Most rubber-tired trains are purpose-built and designed for the system on which they operate. Guided buses are sometimes referred to as ‘trams on tires’, and compared to rubber-tired metros. 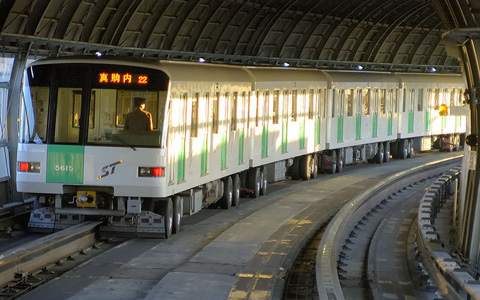 The vehicle is in the form of electric multiple unit, with power supplied by one, or both, of the guide bars, which thus also serves as the third rail (the current is not picked up through the horizontal wheels, but through a separate lateral pickup shoe). The return current passes through a return shoe to the top of one, or both of the rails, or to the other guide bar, depending on the type of system.

The type of guideway used on a system varies between networks. Two parallel rollways, each the width of a tyre are used, either of concrete (Montreal Metro, Lille Metro, Toulouse Metro, most part of Santiago Metro), H-Shape hot rolled steel (Paris Métro, Mexico City Metro, the non-underground section of Santiago Metro), or flat steel (Sapporo Municipal Subway). As on a railway, the driver does not have to steer, because the system relies on a redundant system of railway steel wheels with flanges on steel rail tracks. The Sapporo system is an exception as it uses a central guidance rail only.[1] The VAL system used in Lille and Toulouse has conventional track between the guide bars.

The higher friction and increased rolling resistance cause disadvantages (compared to steel wheel on steel rail):