A monorail is a rail-based transportation system based on a single rail, which acts as its sole support and its guideway. The term is also used variously to describe the beam of the system, or the vehicles traveling on such a beam or track. The term originates from the contraction of the words mono (one) and rail, from as early as 1897 as early systems used metal rails. The transportation system is often referred to as a railway. Colloquially, the term “monorail” is often used erroneously to describe any form of elevated rail or peoplemover. In fact, the term solely refers to the style of track, not its elevation.

Monorail systems have found shared applications in the transportation market in airport transfer and some medium capacity metro systems. To differentiate monorail systems from other transport modes, the Monorail Society further clarifies the definition of a monorail such that the beam in a monorail system is narrower than the vehicle.

Monorails are often but not exclusively elevated, sometimes leading to confusion with other elevated systems such as the Docklands Light Railway, Vancouver SkyTrain and the JFK AirTrain. Monorail vehicles are often at first glance similar to other light rail vehicles, and can be both manned and unmanned. Monorail vehicles can also be found in singular rigid format, articulated single units, or as multiple units coupled into ‘trains’. In common with other advanced rapid transit systems, some monorails are driven by linear induction motor. In common with many dual rail systems, the vehicle bodies are connected to the beam via bogies, allowing curves to be negotiated.

Unlike some trams and light rail systems, modern monorails are always partitioned from other traffic and pedestrians. Monorails are both guided and supported via interaction with the same single beam, in contrast to other guided systems such as Rubber-tyred metros, such as the Sapporo Municipal Subway; or guided buses or trams, such as Translohr. Monorails also do not use pantographs. 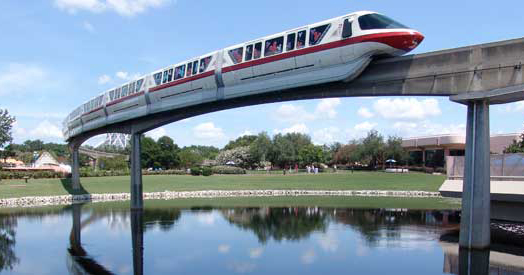