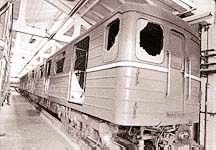 In October 28, 1995, an electrical failure led to a fire on one of the trains in Baku’s Metro. The electrical failure caused a fire in the fourth of five cars and made the train to stop between two stations, Uldus and Narimanov, 200 meters after leaving the station Uldus, see figure. The fire, still one of the worst to have occurred in an underground metro, killed 289 people and injured 265.

Although a number of people who evacuated the train survived, the fire remains the world’s deadliest subway disaster. The Ulduz and Nariman Narimanov metro stations serve the northern part of Azerbaijan’s capital, Baku. The tunnel between them was equipped with a controllable ventilation system, but had a relatively narrow cross-section (height 5.6 metres, width 5 metres).

The human behaviour in the accident and what happened after the train came to a stop inside the tunnel has not been very well documented. Exactly what initiated the evacuation is unclear, but as the train came to a stop smoke soon began to fill the tunnel. The train driver noticed that there was something wrong, got out and used one of the tunnel telephones to contact the traffic information centre. Among other things, the driver instructed the operators to cut the electricity off since the cars were still supplied with electricity.

At the same time passengers initiated the evacuation. Due to crowding, it is not likely that they observed the emergency door openers but since the electricity was shut off the emergency door openers would not have functioned anyway. The only way to open the doors was to slide them open with manual power, a complicated procedure when people are leaning against the doors. Instead windows were smashed to provide exits. Unfortunately, this enabled the smoke to travel into the cars. The train driver assisted the evacuation by opening the doors in the front and the end of the train, making it easier to travel from the back of the train to the front. The passengers that managed to exit the cars initially had the option either to evacuate back to Uldus (200 meters) or in the train’s direction to Narimanov (2000 meters). But as the fire grew, the option to evacuate to Uldus diminished.

The evacuation was not only impeded by the toxic smoke, which made it hard to breathe, but also by the reduced lighting in the tunnel and by a trench that ran between the rails. The lighting consisted of unprotected light bulbs that were placed high and constantly lit. The smoke produced by the fire effectively covered these bulbs, thus reducing the visibility. The trench that ran between the rails made it difficult to walk at the tracks, which forced passengers to travel close to the tunnel wall, grasping cables along the wall. Passengers also held each other’s clothes in order to not get lost in the dark tunnel. Initially the ventilation conditions tended to move the smoke slowly towards the rear of the train, towards Uldus. But around 15 minutes after the train had come to a stop the directional mode of the ventilation was changed and smoke began to move towards Narimanov, further impeding the conditions for the evacuees.

A majority of the deceased died inside the train without ever getting out. The fast fire growth played its role but most certainly the inability to open the train doors affected the outcome. It is hard to draw any conclusions about the organisational factors during the fire, but they seem to have been inadequate. For instance, the passengers evacuating to Narimanov did not receive any medical treatment when they arrived at the station because all the fire fighters were at Uldus. Furthermore, it seems as if the information from train staff to passengers were more or less nonexistent.